Building the gender classifier I've written about here got me interested in ambiguous names - those that are shared by people of both genders.

I realised I could use the list of male and female charity trustee names I'd gathered to look into this in a bit more detail. Bearing in mind the limitations and bias of the source dataset, I think it can generate some insight.

This blogpost was written as a juypter notebook, so it can be run to recreate the research. You can find the notebook code on github.

We start by importing the libraries we need - two built-in python libraries (csv and collections), pandas for analysing the data and matplotlib for making charts.

To start, we go through all the names in our source data, and use the names with titles to find first names of males and females. To do this I've just taken the first word from the string, excluding the title, providing it's more than one character. This is fairly crude, and will be wrong in some cases (eg someone who uses two first names). But it should be good enough for our purposes.

Lets check the female and male names to check we're on the right track.

Next we work out the count of how many times each name appears for men and women. To do this the data is put into panda dataframes.

We then apply our weighting to the female figures to adjust for the lower number in our sample.

These dataframes are merged together, joining on the name, to give us a list of first names found in the dataset alongside the number of females and males found with that name.

We can see a list of the top 10 most common first names in the dataset (only two female names make the list - even after applying our weighting).

And a list of some of the least common - these names only appear once.

We now move on to what we were trying to do - get a list of names that are commonly shared between people of different genders. You can see from the top 10s above that it's not a perfect dataset - some names that you might assume are unambiguously male or female have some counterparts - there are 8 female Davids, and 3 male Susans.

This could be a mistake in the way the algorithm was applied, a typo in the data, or people who have an unusual name. But to look only at names we would expect to be more common, I've filtered to only show only names where more than 30 instances of both male and female people have the name. This threshold should also ensure we have a decent sample of people for each name. 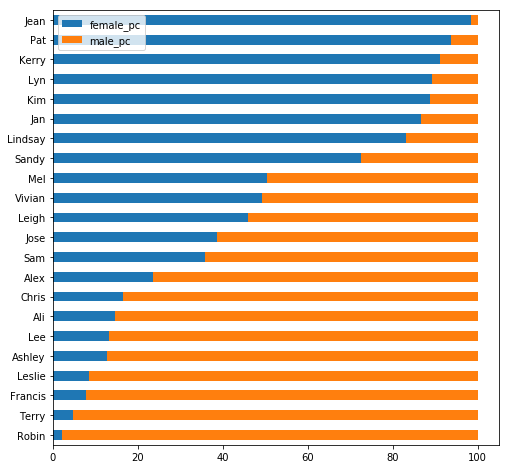 Charting the data gives us a few clusters: